After Jamie hurt his shoulder I was needed to go out and help move our Santa cows from one paddock to the next, of course I jumped at the opportunity to go work my dogs on a large mob of cattle. Because the mob we where moving were older cows with some calves on the ground already I could only take Sonny as the others are too young to work cows and calves yet. We about 500 cows to put together in 1300 acres then move them onto there next paddock, we came across about 100 cows at one water point Jamie and started them down the fence towards the gate they had to go though. Not far from the water was a patch of timber which is hard to ride through on our motorbikes, Jamie warned me that the cows could bet us through it and get back to where we started if we where not in control. Jamie took the lead and the wing and Sonny I had the tail and the wing, I sat just out from the cows and put Sonny on the tail just to keep the slow ones on the move and to also make sure none went back. All points covered and the cows kept walking in the direction they where meant to be going.
With this group in there new paddock it was onto the large mob whom had been pushed onto another water point in the middle of the paddock there was about 400 in this mob and they had to walked down the road in the middle of the paddock with no fences. Jamie took the lead, Jeff(our stationhand)had one wing that left myself on the other wing and Sonny, Lucy and Rusty on the tail. Some of the cows tried to run away down the creek which was not far from the bore so I sent Sonny to bring them back, he did with ease and then took his position back at the tail to push the cows through the creek crossing. Lucy is getting stronger every time she goes out for  little dog she is not scared of the cattle at all. We walked the cattle nearly 2 kms down the road until we reach the gate they had to go through, the dogs where very happy to see the trough. 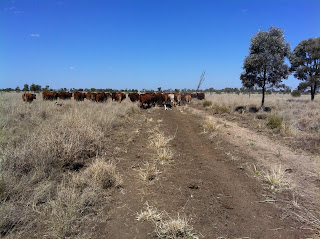 Sonny going to tuck the wing back in while Lucy and Rusty keep them going. 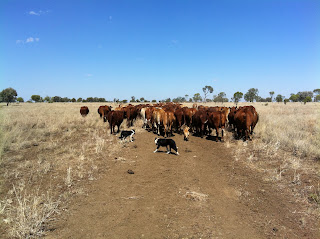 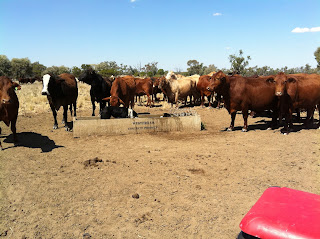 Sonny Cooling off before putting the cows through the gate. 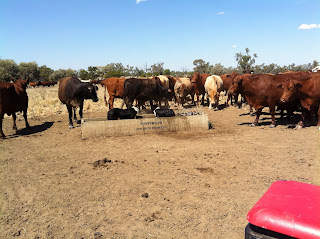 Just before Sonny & Lucy are told to "push them up" look out cows.

I am kicking myself I didn't take a normal camera with me that day, I took all the above photos on my phone but it takes a while between shots before you can take the next on so I missed the dogs pushing the cows, next time I will make sure the camera goes in my red box on the front of my bike that always seems to end up in my photos. 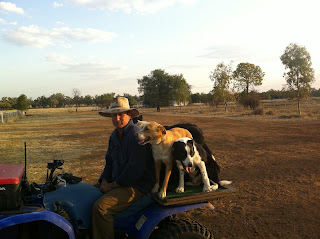 ﻿Jamie, Bill, Rusty, Lucy and Sonny on my motor bike one afternoon just chilling out. We do this every afternoon .
I have been working with Sonny and Nell this week, Sonny has been slowing down early on his cast in the training paddock and when we go to trials. He feels the pressure from the sheep early in small spaces and does not want to upset them I have found this very funny with him because as soon as he is in a bigger training paddock or out working he will not do this, I have noticed he is slowing earlier and earlier, I felt this is not good so I have been getting him to run the whole way until he is behind his sheep. It is working he has worked out that yes he can run the whole way behind his sheep without upsetting them. I will keep working on this with him so he realises that he has to do it every time. I have also been working on Sonny's driving he as picked up driving fairly easy but still feels he needs to bring the sheep back to me if he gets to far away, I have just been pushing the length further and further every time we drive the sheep away. Judging where my dog should be while so far away is proving to be hard for me, I am having trouble guessing when I should be stopping him maybe I need glasses so I can see him better.
Young Nell has also been put into training she is nearly 11 months old now and I just felt she can handle it. I have been working on pulling her off balance which she is not liking very much but will do it. We have also tried little drives with me walking along side her, she is picking this up but still wanting to head the sheep. I am really enjoying training her she has a great temperament and wants to work with me.
Posted by Bauers Working Border Collies at 00:30 No comments: