We are back in full swing after being away for 10 days, Jayde our eldest girl was running in the State Cross Country she did well coming 21st out of 52 girls. This was followed by a few days on the Gold Coast which the girls loved.
When we returned home it was straight into preg testing the cow's, Jamie has about 1600 to do which will take a couple of weeks. Testing the cows involves bringing them into the yard placed into the crush where Jamie puts his arm up there bottom to feel for either a calf or other signes they are in calf. Any cows which are not in calf  are culled and pregnant cows are retained, the cow below was in calf she stood there all day and watched us do all the other cows. Brahmans are very inquisitive and will often come up to in the paddock to see what we are doing . The dogs like this time of year as the cows do not have calves on the ground and they are much easier to handle as the cows are very protective of their calves. 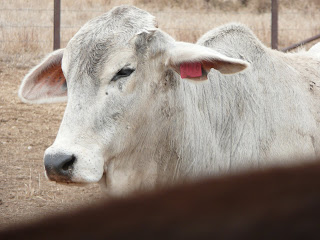 Just before going away I was able to go out mustering this was my 1st time in about two months, it was great to get out in the paddock again. We had to bring in the weaner heifers to be classed and have some needles, Sonny came out too help I think he was very happy about this. Jamie left Sonny and I with about 300 weaners while he went and mustered the rest of the paddock, I had to get all the heifers through a gully which lead back to the dam and of course they wanted to go that way and not down the fence!!! I could either leave Sonny on the tail or put him where he would stop them from going down the gully, I sent him to that point and I kept pushing the tail across the gully in the mean time the lead thought they would go for a little trot down the fence so I sent Sonny to the lead to block them which he did with ease. 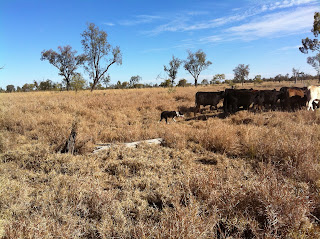 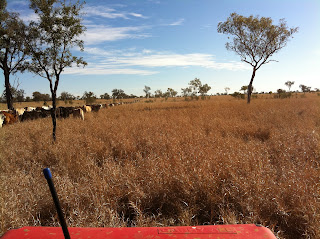 We have also found a bit of spare time to work our young dogs, I must say we are happy with all of them. Our two Mirk bitches are going great they are 10 months old now and ready for a bit more training, Nell(my girl) has great coverage and has a lot of power I didn't get any photos of her this time but will do this weekend. Lass(Jamie's girl) is just as good as her sister although she is just a little wider then her sister, we both cant wait until they get a little older. I think the star of the weekend was Sweep who is a son to Michael Gallagers Cap, this dog I feel has it all he has the looks, distance, feel and power you would want in a top work dog, Jamie really enjoys working Sweep. I did get a couple of photos of Sweep working. 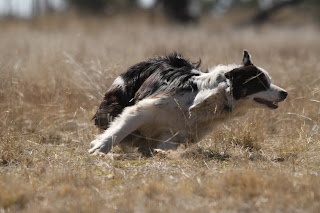 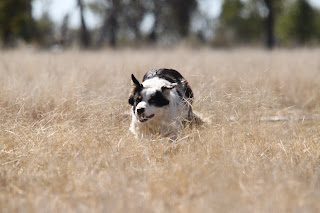 The brothers Max and Blade also had there turn, Max is turning out to be a lot like Bill in how he works as well as his personalty. He is very clam pup when working I have seen him take two steps to the side to move a sheep. 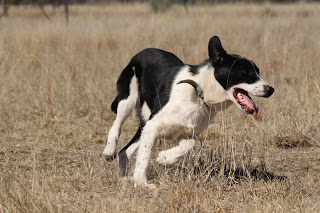 Blade is a great pup to have around he is so friendly and willing to please. He works a lot like his brother but I think Max is the pick of the two but only time will tell. 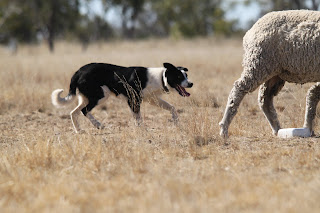 Don is a son of my Sonny and Bella, he is a lot like his Mum in very way. He quite free moving and very pushy like Bella. I took some photos of Don although at the time I didn't realise he had his tongue poking out. 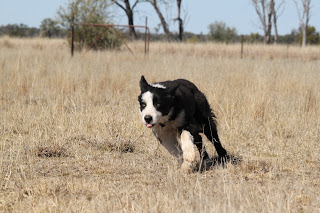 While all this work was going on Old Bill was in the background ready to help the younger pups if the sheep got away on them, he just sits under a tree waiting for Jamie to give the command to go. He is great for this job however he is showing his age and not as fast as he use to be, it is sad to see when his mind is still very active but his old body is failing him. He is still a handsome looking dog. 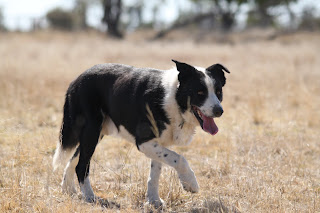 I love watching the pups grow and they go though different stages, little Ben at the moment cant quite control his ears there not sure where they want to be. 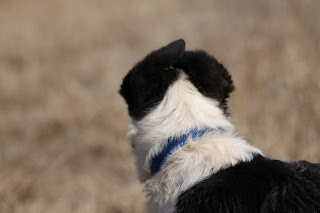 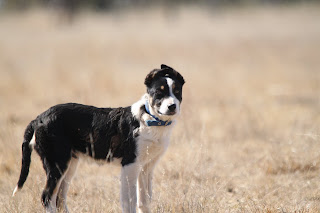